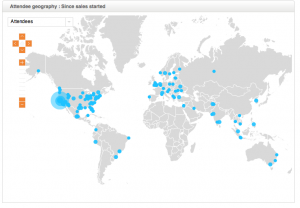 I love a good developer #Hackathon and sadly there are hardly any run in Australia, no by #hackathon i dont mean where developers try to break into stuff a #hackathon is where you have a set time frame to build a application or game with a defined theme.

I was luck enough to secure 2 virtual attendee tickets for the event which was being held in San Francisco, of course the down side to this was that we had to get up at 1am Australian Eastern Standard Time. But it was so well worth it with us being able to connect to so many cool developers and even got to talk to the one and only Corona SDK founder Carlos Icaza.

So some background, Corona SDK is a mobile development platform that uses the LUA programming language to allow cross platform app development for iOS (iPhone, iPad etc) and on Android (everything else in the world lol) and even soon Windows Phone 7. In other (Nerdy) words its…

One App Language to Rule them all

So why Corona? well i was looking for a language for Social Media Fusion that was cross platform so that we only had to write code once but still had the functionality we needed (JSON feeds animation etc) and although its written in LUA, which as a PHP developer is a bit of a pain to develop in cause it isnt OOP, its easy and fast to get apps up and running quite quickly.

I did look at other cross platform languages like Appcelerator which is an absolute bitch to setup and is so truncated into different variations, and Marmalade which is actually quite good but more suited to hardcore game development (and its written in C) but ended up settling on Corona.

So all in all the 1st Corona #Hackathon, which was on Sunday 1am Australian Eastern Standard Time, went well. I think it could have been organised a little better but for a first time #hackathon (and ive been to quite a few) it wasnt all that bad and even as a virtual attendee i have to say i had a good time.

While we werent able to actually get our application finished we got so much done we do plan to finish it off, stay tuned for when that launches. A big special mention to Corona’s PR manager Hetal for keeping us entertained on the Corona ustream channel but a cheers to all the Corona crew for an excellent effort all round!

Id also like to thank my good friends Marc Cohen and Marsha Collier over at the Computer and Technology radio show in America, who i talked to at about 5am Australian time (2pm LA time) about the #hackathon, you guys rock 🙂

Printing some upgrades for around the house. You c